Dayton History plans to begin excavation this spring on a nearly one-mile railroad that will circle the 65-acre park.

Boarding and departure train stations will be set up near the main building and the transport hub.

The park will relocate its existing rail depot and construct a new station at the end of the property.

The electric-powered train will accommodate 120 passengers and will run three times per hour.

The 145-foot-long train and open coaches will run along a three-foot gauge railroad.

Dayton History first offered to install a working train and track in 2007, but park executives’ interest in acquiring a locomotive like this dates back much further, has Kress said.

Deeds never got his hands on the type of train he wanted, but he ordered a miniature model of the “Cincinnati”, which was the first locomotive to pull a passenger train at Dayton in 1851.

The new train will be identical to the Cincinnati, Kress said, and it will be built by England-based Severn Lamb, which designs and manufactures urban, leisure and resort light transport.

Brady Kress, president and CEO of Dayton History, points out the railroad on a map of the 65-acre Carillon Historic Park. CORNELIUS FROLIK / STAFF 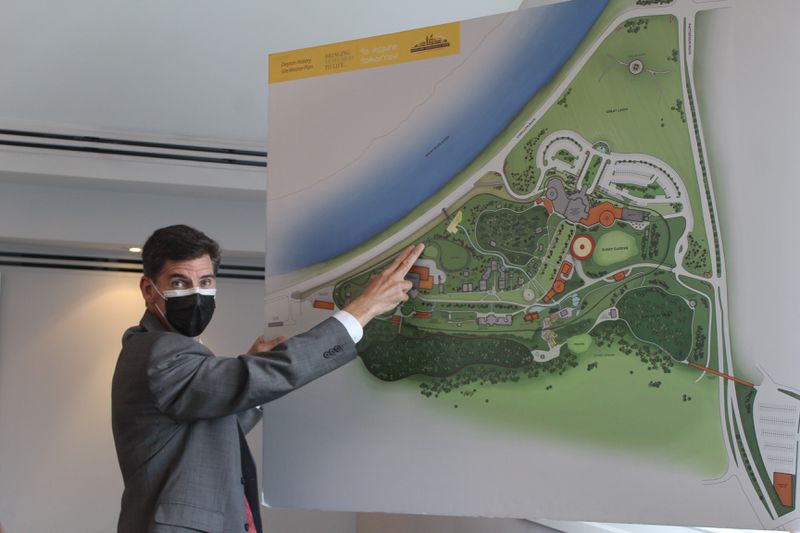 Brady Kress, president and CEO of Dayton History, points out the railroad on a map of the 65-acre Carillon Historic Park. CORNELIUS FROLIK / STAFF

Dayton History is still fundraising for the project, but Kress said more than half of the funds needed came from private donors.

Excavation of the train bed will begin this spring and should be complete by November so that the work does not interfere with the nesting habits of the bald eagles that reside in the park, Kress said.

Dayton History also wants the construction to take advantage of the park’s smaller crowds this year because students and school groups aren’t visiting due to the pandemic, he said.

The park will also get a new three-cell bridge about 100 feet long that the train will cross, Kress said.

Carillon Historical Park has a miniature train (1/8th scale) which is run by volunteers on certain dates. This project will have no impact on this attraction.

Shots fired at a passenger train in the far south