The plan to bring a new streetcar line along an 18-mile stretch of South Jersey from Glassboro to Camden took another step forward last week with the selection of two companies to handle the project management and preliminary design work.

The Glassboro-Camden Light Rail Project was first envisioned in 2005 as a transportation initiative to expand the Philadelphia-Camden metro area. Its supporters have long argued that the lack of fixed rail transport in South Jersey has held the region back, especially as Gloucester County is ready for population and employment growth in the coming decades.

Supported by the Delaware River Port Authority, PATCO and NJ Transit, the GCL plans 14 new stations along an existing Conrail line using light diesel trains. The new line, similar to the River Line between Camden and Trenton, would allow riders to switch to the PATCO Speedline to access Philadelphia and other parts of Camden County. 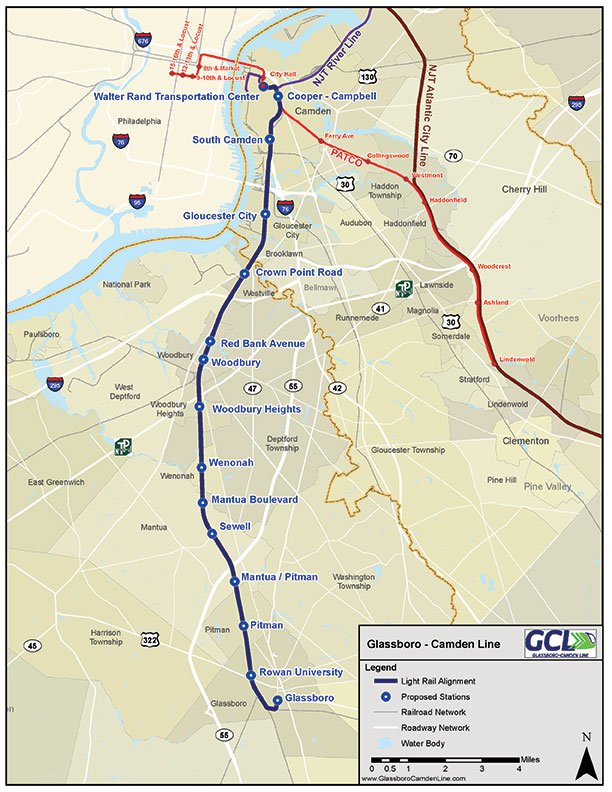 “The GCL is an important initiative to improve mobility by providing fast, reliable and frequent rail service in the region,” said Bane Gaiser, General Manager of AECOM’s Eastern US and Latin America Region. “Our joint venture SJTP is incredibly proud to continue its crucial work, leveraging our deep understanding of GCL’s objectives, project scope, stakeholder engagement and audience needs to successfully deliver a transport that will have a positive impact on the day-to-day life of South Jerseys.”

The upcoming phase is expected to last three years and encompass design specifications and contract documents, right-of-way acquisitions and easements, and land and utility surveys. SJTP will also continue community relations and audience engagement over the next few years.

Some GCL reviews wonder why the proposal favors diesel over electric vehicles and whether public transit demand will actually meet funder expectations. There are also concerns about local disturbances from construction activities and the expected cost of the project, which was last estimated in 2009 at $1.6-1.8 billion. This estimate has not changed on the GCL website.

A environmental impact report released last year projected that the GCL would operate daily from 5 a.m. to midnight and carry up to 300 passengers at a time on two sets of trains. The service would run every 15 minutes during peak and midday periods, and every 30 minutes during late evening periods. The average one-way journey for the entire line would be around 35-40 minutes.

Those who support the GCL view the project as an essential step towards greater accessibility throughout the region, saying it will reduce traffic congestion, increase transit options for students, improve the region’s business prospects and increase property values . Supporters also point to ongoing redevelopment in Camden, where the Walter Rand Transportation Center is already undergoing a $250 million overhaul that will bolster investment in rail development in South Jersey.

“We expect mass transit to be even more important in the future,” said DRPA CEO John T. Hanson. “Now is the time to build permanent infrastructure that will provide South Jersey residents and businesses with safe and equitable access to key destinations and create opportunities for business expansion and employee recruitment.”

The next phase of the study is expected to be funded by $200 million from the quasi-private South Jersey Transportation Authority. A preliminary timeline for commissioning of the GCL once design and construction is complete is 2028.