A day after the City of Montreal released its Peel Street redevelopment plans, contractor CDPQ Infra released its design plans for the Eastern REM light rail line that will extend from downtown in Pointe-aux-Trembles in the east.

Along with an elevated train that meanders along the St. Lawrence River, the design includes a new 16-kilometre walkway, a 24-kilometre expansion of bike paths, and 70,000 new homes and offices that will be incorporated into the design.

The promenades on Sherbrooke Street East, Notre-Dame Boulevard and René-Lévesque Boulevard are also part of the design.

The René-Lévesque promenade project, which will be part of the REM de l’Est. SOURCE: CDPQ

The price of the project is estimated at $10 billion and a report by the Autorité régionale de transport métropolitain (ARTM) recently criticized it as not worth the cost based on expected ridership.

The report indicates that 64% of potential users in the east already use public transit during peak hours and that the REM would only gain a limited number of new customers.

Another criticism of the design comes from defenders of Montreal’s Chinatown, which recently won heritage protection.

Dr. Winston Chan is a member of the Inclusive Ritivalization: Present and Future of Chinatown committee and notes that with the Ville-Marie Expressway to the south, the Palais des Congrès to the west, and now the East REM to the north, the historic community is being locked down.

“Chinatown has been shrinking for 40 years and having a station there will shrink it further,” he said.

The design of the REM’s Saint-Laurent station will block out the arch, mural and statues that mark the entrance to Chinatown, so those approaching the neighborhood from the north will not be able to see the iconic pieces. 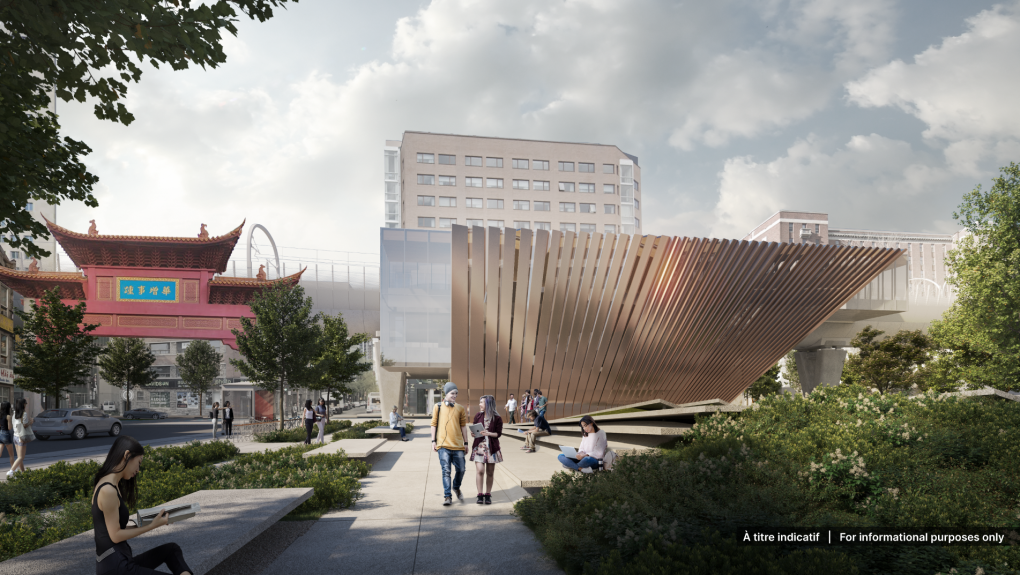 The interpretation of Saint-Laurent station for the Eastern REM line has been criticized by some for the apparent inevitability of the line blocking Chinatown’s iconic arches. SOURCE: CDPQ

The restitution of Saint-Laurent station for the Eastern REM line has been criticized by some for blocking Chinatown’s iconic arches. SOURCE: CDPQ

The description of the station by CDPQ Infra states that the route will offer passengers a view of Chinatown and that the designers “have designed a station that enters into dialogue with the arch of Chinatown and an adjacent public square”.

The design, however, tells a different story for Chan.

“The design is also not in harmony with Chinatown,” he said, adding that the committee had already sent a letter to REM designers last year with these concerns.

“They didn’t respond,” he said. “If they considered the concerns, they wouldn’t make a station there.”

Those interested in the design can attend a virtual briefing Thursday at 6 p.m.