Traffic in Tel Aviv is expected to worsen before the end of the year when the main segment of Allenby Street, one of the busiest in the city, is blocked for construction of the Purple Line light rail.

Under current plans, cars, buses, garbage collection and store supply trucks will be permanently redirected to adjacent roads in the coming months as the street will be exclusively used by light rail when the line is expected to open in 2026, drawing the ire of residents and shopkeepers.

The section of track is planned to be built at ground level as opposed to underground, like other parts of the railway system.

Thousands of buses pass through the popular street every day, home to the iconic Carmel Market. Private vehicles are already prohibited from using parts of Allenby due to the works.

The street will be closed in stages, starting with a segment near the intersection of Ben Yehuda Street. Later, the central part of Allenby, from the intersection with King George Street to its southern end, will also be blocked.

The Tel Aviv Municipality said in a statement that a final decision on the plans and closing date has yet to be made.

However, he said, he has concluded with NTA Metropolitan Mass Transit System, the company in charge of light rail, that complete street closure will not occur until the first light rail line – the Red Line – becomes operational in November after several years of delay.

An NTA official told the Ynet news site that allowing buses to use the route, as originally planned, would require uprooting trees and make it more difficult for the system to be on time.

“A bus that is late with its passengers can delay the train following it and affect the service which affects the [central] Dan area, because the trains depend on each other,” the anonymous official said.

She pushed for a return to the original plan, which would have allowed buses to run alongside trams by the end of construction. 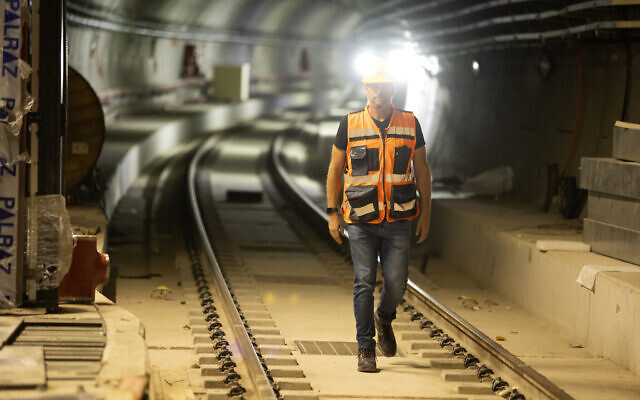 “We are cast to suffer permanently. It’s not a temporary thing,” Gelz complained, according to Ynet.

Deputy Mayor Meital Lahavi wrote to Tel Aviv Municipality Chief Executive Menachem Leiva in August, asking for a reassessment of Allenby’s closure plan and stressing that the first light rail line slated to open, the red line, must be operational before Allenby closes.

She recommended the establishment of electric minibus lines that would connect the heart of the city to the red line and other main public transport corridors.

When it opens, the Red Line will run from Bat Yam to Petah Tikva via Tel Aviv-Jaffa, Ramat Gan and Bnei Brak.

You are a dedicated reader

We’re really glad you read X Articles from The Times of Israel over the past month.

That’s why we started The Times of Israel ten years ago – to provide discerning readers like you with must-read coverage of Israel and the Jewish world.

So now we have a request. Unlike other media, we don’t have a paywall in place. But since the journalism we do is expensive, we invite readers to whom The Times of Israel has become important to support our work by joining The Times of Israel community.

For just $6 a month, you can help support our quality journalism while benefiting from The Times of Israel WITHOUT ADVERTISINGas well as access Exclusive content only available to members of the Times of Israel community.

Thanks,
David Horovitz, founding editor of The Times of Israel

Already a member? Log in to stop seeing this