On March 30, 1971, Norfolk and Western announced that the final runs of trains 301-304, The Wabash Cannonball, 121-124, The City of Decatur, and 3-4, The Pocahontas, would be April 30. Discontinuation of intercity passenger service on the railroad resulted from the non-inclusion of N&W routes by the National Railroad Passenger Corporation (Amtrak).

At 8:30 a.m. on Saturday, April 23, an unusual train pulled out of Vardo Yard in Hagerstown, Maryland. The southbound supplement had 11 loads and 41 empties, plus two passenger-type cars at the head. N&W “Claytor Lake” Office Car and High Iron “Conneaut” Crew Car. On the tip was the old Nickel Plate Road No. 759. Greater Berkshire was en route to Roanoke to supply The Pocahontas between Roanoke and Norfolk on Saturday May 1. Extra 759 had no trouble pulling 2100 tons until she arrived at Vaughn, 81 miles south of Hagerstown. Here she stalled as she tried to pull the 55 cars up a short but steep incline. A 30 mph headwind contributed significantly to the 759’s problem, creating strong drag on the empty hoppers.

The train was cut and the coast was doubled, which caused a delay of more than an hour. The mighty 2-8-4 encountered the same difficulty 1/2 mile below Luray on another hill. Within 200 feet of the summit, Berkshire slid. The wind blew sand from the tracks before drivers could drive over them. Once again she tried to overcome the short 1.8% slope to no avail. Three times she tried to cross the hill. The empty hoppers at the rear were dumped on the main track for No. 95 to retrieve later and the train hit Shenandoah with 11 cars. After coal and watering and with a new cabin aft, the supplement headed south for an uneventful run to Roanoke. Arrival was at 8:46 p.m.

The 759 was turned onto Campbell Avenue Wye to be properly pointed for the run to Norfolk before being placed in the East End Shops complex for maintenance and ‘modification’. The modifications consisted of lettering of the tender “Norfolk and Western” and the installation of the whistle of the class J n° 611. 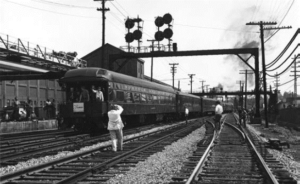 Friday 30 April was the date of the last runs of all intercity passenger runs on Norfolk and the West. Numbers 17-18 made the final trips between Lynchburg and Bristol. Train 3 as well as 17-18 all left Roanoke on time for the last time on Friday. Due to a pre-midnight departure from Cincinnati, the eastbound No. 4 would not make its final outing from Roanoke until Saturday, May 1. 4:00 am

Just outside the East End shops and with restoration work completed, Class A No. 1218 was on display in Track 2. The articulated mammoth would soon be on display at the Roanoke Transport Museum. Pocahontas gear that had arrived in Norfolk the day before had been sent back to Roanoke overnight to make room for the expected crowd.

This equipment along with baggage car 1286 was on track 3. The baggage car was operated by Roanoke Chapter as a souvenir snack concession selling soft drinks, sandwiches, candies, postcards, records , railroad caps and bandanas and other related items. Under the able leadership of Dave Helmer and Joe Austin, we were able to serve hundreds of people who could not have been served in the restaurant.

Regular passenger rail service in Roanoke became history as the most impressive train to ever run the Norfolk and Western departed from Track 4 at 12:19 p.m. Crowds lining the tracks saw a locomotive steam engine spitting black tar smoke pulling an 18-car train. which included three domes and an open rear viewing platform with a drum head and oil running lights.

For the first time in 12 years, the sound of a famous 600 whistle was heard in Star City as the Pocahontas bid farewell to the N&W headquarters city and its people.

Over a thousand people rode the latest Pocahontas. All 13 coaches were virtually complete as they left Roanoke. Passengers dwindled a bit after Lynchburg, but the train was full again on departure from Petersburg. Two conductors collected the tickets and checked the passes. Three train attendants helped passengers get on and off.

In the “Lafayette” lounge car, local elected officials and members of the press joined in the nostalgia. Among those present were NRHS National Chairman E. Lewis Pardee, David P. Morgan and H. Reid. The 494 lounge-dining room had been converted into a full restaurant with seating for 36 people. The line that formed in the aisle next to the kitchen was reminiscent of eating on the Pocahontas during World War II. Among others, N&W Executive Vice President RB Claytor had a nightcap at the restaurant. 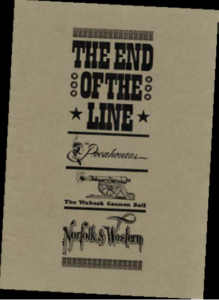 All passengers received an excellent commemorative souvenir booklet entitled “The End of The Line”. The booklet gives a full account of passenger service on Norfolk and the West from 1838 to the present day. Included are reproductions of old timetables and pictures, many dating back to the last century.

Probably the fastest coal and water shutdown of the diesel era was accomplished at Crewe that afternoon. Only 31 minutes were needed to complete the offers. Although speeds of 65 mph were reached between stations, the crowds that had gathered at each depot resulted in a few extra minutes of delay at each stop. Even under cover of darkness in Suffolk and South Norfolk, people lined the tracks.

Over 2,500 were at Norfolk Station to see a sight they would never see again. Intercity passenger service on the Norfolk and West ended at 9:06 p.m. May 1, as the Pocahontas made its final station stop. What a great way to mark the end of an excellent example of an American institution!

Reprinted with permission from “The Turntable Times”. Originally published May 20, 1971